How to Beat the Skilled Labor Shortage in 2021, Part 2 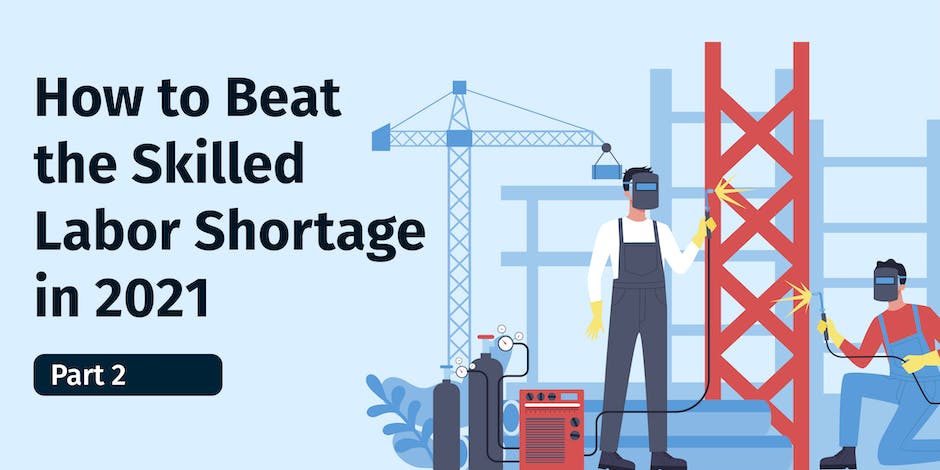 If you’re a business owner in any facet of the construction industry, you’ve felt the sting of the labor shortage.

But there are ways, not only to thrive in spite of the construction labor shortage, but to stop it altogether.

In part one of this two-article series, we focused on how you can fortify your own company against the labor shortage.

In this article, we’ll focus on ways to stop the shortage industry-wide.

The Power to Stop the Shortage Is in Our Hands

The construction labor shortage started with the mass exodus of construction workers during the 2008 recession. And there isn’t anything we can do about that.

But the labor shortage continues to widen because too few people are being drawn into the industry today. And that’s within our power to change.

To do so, though, we have to confront the negative mindsets, prejudices, and bad attitudes that surround the construction industry. And we need to identify and change the conversations that are pushing people away. 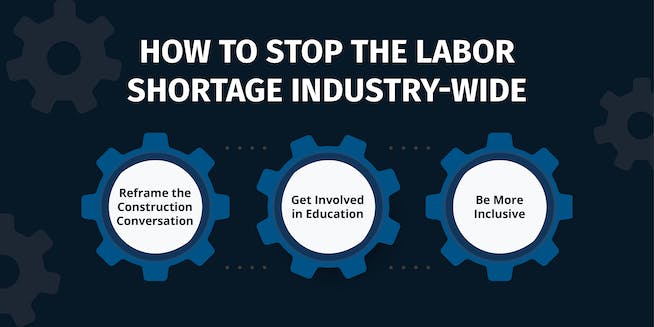 So, if you’re ready to take part in establishing the changes that can stop the industry-wide construction labor shortage, start taking these steps now:

Construction careers have gotten a bad rap over the years.

Many people wrongly assume construction is a low-paying industry. They think that the work is too hard and too risky. And somewhere along the way, construction professionals have been stigmatized as people who aren’t smart enough to do more “prestigious” types of work.

The irony is that many jobs in other, more highly regarded industries are just as hard on the body and as risky, if not more so, than construction work. Ask any doctor or nurse who’s worked through the pandemic.

And starting salaries in construction aren’t bad, either. They average at $18 per hour for entry level, and they aren’t coupled with massive student loan debt.

As for construction work being for dummies, Paradis marvels at this misconception.

“It's funny,” she says. “Because if you watched a hanging crew, if you really saw them and the math they do on a complicated house -- the complex math that has to go into cutting drywall -- the last thing you’d think is that they're not smart.”

So what’s driving these poor perceptions of the construction labor force?

A major contributor is that four-year colleges have had great PR teams throughout the years. And college degrees are positioned as THE way to get a good job that pays good money.

In contrast, trade schools, like those that teach construction skills, are often presented as “alternatives” for students who don’t have the money or grades to get into college.

The false perception about trades being for low-income folks who struggle in school is woven into our earliest conversations about secondary education. 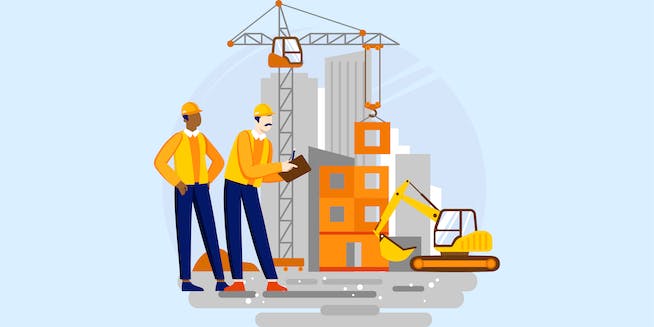 To illustrate just how pervasive this attitude is, consider this: only 11% of Americans aged 18 to 24 believe that going to a trade school can give them access to a high-paying job.

And it’s not just the youth of America who believe this.

Even some parents who actually have careers in construction think this way. They’re pushing for their kids to enter careers they deem easier, in industries they believe pay better -- out of a heart of wanting what’s best for their kids.

“My father is a contractor and was horrified that I went to college and then became a contractor. He was like, ‘This is not what I want for you.’

And she believes her story isn’t an isolated one.

“I think a lot of people raised their kids, and they didn't want them to have to work that hard. [They thought], ‘I’ll bust my ass, so you can go to college and get a job where you get to sit behind a desk instead of breaking your back for a dollar.’”

So how can we confront this deeply ingrained narrative?

“There need to be more conversations with people who are in construction to show that this is not their plan B,” says Paradis. “It shouldn't be presented as, ‘If you don't want to go to college, then you can just go to the trades.’

“It should be, ‘Hey, there are a lot of successful construction people out there.’

“I don't think we showcase the really successful construction people. I know construction dudes who work six months out of the year and spend the other six months in the Bahamas or in Key West.

“Yes, it's hard work. But you can make it what you want to make it.”

And the conversation that construction is a worthy career path, not just an alternative one, needs to happen on several levels.

“It's really at the middle school level that students start to formulate their life path or career path,” says Alicia Smith, spokesperson for Build Smart Institute, a new trade school in Roanoke, Virginia.

So Build Smart is proactively reaching out to this age group.

“This summer, we're going to do some summer camps for the younger ones, the elementary and middle school kids. If we can light that fire at an early age, who knows?” says Smith.

And while no one can foresee how many of these kids will actually grow up and enter the industry, one thing is for sure: Because of Build Smart, many kids (and their parents) will be introduced to the construction trades who would never have been otherwise -- especially since schools are offering fewer vocational opportunities than in the past.

And the fact that public schools are struggling to provide vocational classes leaves a gap that construction business owners can, and should, step in and fill.

Get Involved in Education

Smith’s father is the owner of F&S Building Innovations, a construction company that specializes in commercial and residential renovations. And he realized, in order to stop the labor shortage, he needed to get involved in educating a new workforce.

“About five or six years ago my father started talking about starting a construction school,” says Smith. “And we all kind of rolled our eyes and were like, ‘What?!’”

But as the labor shortage worsened, prompting national news coverage, she also realized there was a need.

“Two years ago we decided to quit talking about [the labor shortage] and get off our hands and do something about it.

“We quickly put together a team and spent about a year in research and development. Then we were able to launch Build Smart this past year [in 2020].” 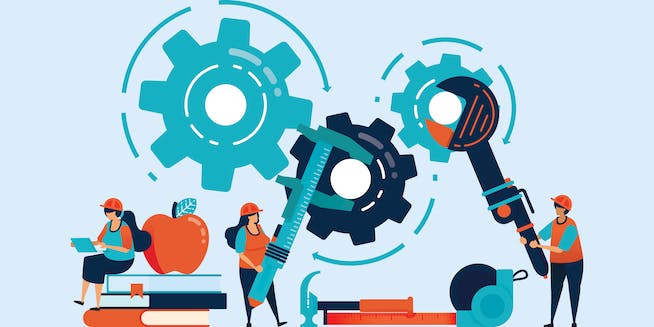 “We've got career exploration programs for middle school -- two- to three-hour presentations that wet their whistle and let them understand what a career in construction might look like.

“We have a course for high school, which is called our Core Fundamentals of Construction. They do framing, plumbing, electric, drywall, paint, and trim. We teach them employability skills, constructive math, and they get hands-on experience. So it's a real broad first step for them.

“And of course, we have courses for adults who are ready to start a new career and are looking for the training they need.”

Smith admits that starting a trade school in the middle of a pandemic was “a heavy lift.” But she says it’s worth it.

“Our goal is to change lives, to give people the tools that they need to have a successful career. They don't have to go to a four-year college and spend $75,000. They can spend significantly less time, significantly fewer dollars, and still have a very lucrative career in construction.”

And even if your company doesn’t have the bandwidth to start a new trade school, there are other options for getting involved in education.

Here are a few ideas to get you started:

And there is plenty of room in construction for more women.

When we think about bringing fresh faces into the construction industry, sometimes we box ourselves in. We only focus on bringing in young men who are fresh from high school.

And while it’s a great idea to get those guys into the industry. It’s past time to start thinking outside the box.

Paradis believes wholeheartedly that one of the best ways to stop the construction labor shortage is to recruit more women.

“Companies are always talking about how we need to bring more people into the workforce,” says Paridis. “They're looking for guys that come out of high school to go into construction.

“And I'm like, ‘Well, what about the women?’ People just aren't having that conversation.”

But she realizes it isn’t just men who aren’t having the conversation that women can work in construction. Not many women are having it either.

“There needs to be a conversation with women that this is not just a male industry,” she says. 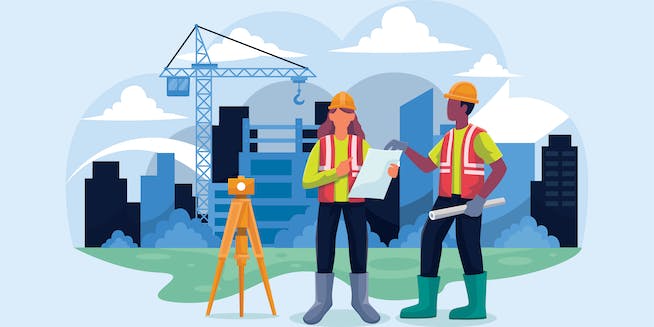 “I was lucky that I was raised by a single mother. It was just me and my sister and there wasn't a man around to do the "man’s jobs.” So the whole idea of,’This is a job for a girl, and this is a job for a boy,’ -- I didn’t have that. If the trash needed to be taken out, then I took the trash out.

“I look at it as a luxury of being raised by a single mom. [Because] when I considered starting a drywall company, I didn't have the idea of, ‘Oh this isn't for a woman.’"

And she believes that as the industry starts showing itself more inclusive, plenty of women will be happy to learn a trade that gives them the ability to be paid well and take pride in their work.

She uses Hope Renovations as an example.

“Hope Renovations, they're taking women in less than ideal life situations and training them to go into the construction field. And they have an insane amount of applicants. They're turning away hundreds of people every session, because they can only take on so many.

“The reality is that there is more interest in women going into construction than you would think.”

They just need to know they have the opportunity.

The construction labor shortage is a real problem. And it’s been growing worse for the past thirteen years.

It’s time leaders in the industry take a hard look at the attitudes and stereotypes (from within the industry and without) that are pushing people away. So we can confront them and change them.

Then we can start to bring in more new talent, train them well, and stop the ever-worsening skilled labor shortage.

Save Time and Money with ClockShark
Thank you! Your submission has been received!
Oops! Something went wrong while submitting the form.