Everything Contractors Need to Know About HomeAdvisor 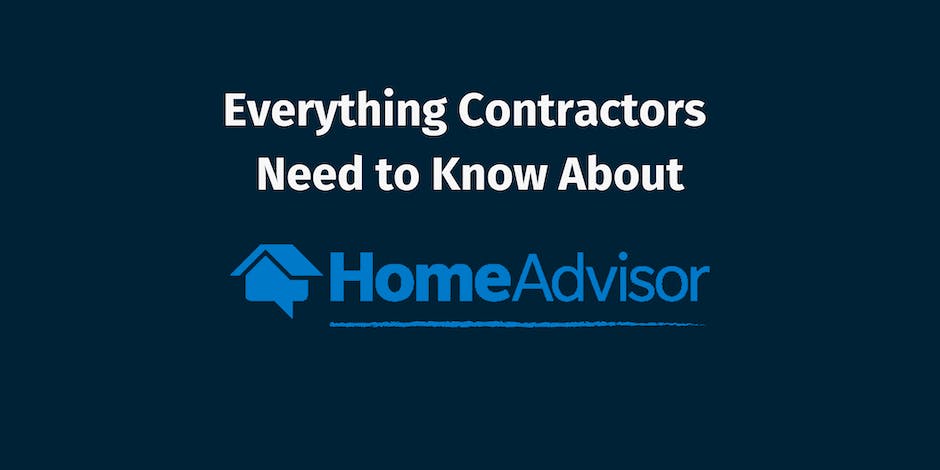 Disclaimer: ClockShark, LLC. is not affiliated with HomeAdvisor or any of it’s associated companies or parent company, nor is any information in this blog post intended to either disparage or promote the service. This blog post is intended strictly for research and informational purposes and could change at any time. It is important that you follow through with your own research before making any decision that might affect your business.

A frequent topic of discussion amongst construction and professional service industries is the company known as HomeAdvisor. Many contractors want to know what HomeAdvisor is, how it works, and if it’s worth looking into.

This post aims to help answer some of these questions and guide contractors on best practices when dealing with HomeAdvisor, as well as some alternatives.

We reached out to construction marketing expert, Catherine Wilson, founder and president of Home Pro Digital for her thoughts on HomeAdvisor and advice for contractors looking to get more leads.

We also spoke with commercial and residential builder Rich Spoto about how he found success with the service, and we reached out to HomeAdvisor, too, to get clarifications so we can pass the information on to you.

HomeAdvisor is a marketplace that connects consumers with home services ranging from remodeling and construction (plumbing, electrical, HVAC, etc.) to landscaping and cleaning. HomeAdvisor was previously known as Service Magic, which launched in 1998 but was acquired by InterActiveCorp (IAC) in 2004.

In 2012, Service Magic was rebranded as HomeAdvisor. According to the company’s website, since that rebranding, “HomeAdvisor has helped more than 45 million homeowners tackle home projects. In 2017, HomeAdvisor merged with Angie’s List to form ANGI Homeservices Inc.”

Essentially, HomeAdvisor is a service that homeowners can use to locate professionals to complete various home improvement projects. These contractors and professionals sign up to use HomeAdvisor and pay a fee for each qualified lead they receive from the company. Homeowners do not pay anything to use the service.

How Much Does HomeAdvisor Cost?

This is a tricky question to answer. We reached out to HomeAdvisor via online chat and it was explained there is an annual fee for contractors which, at the time of this writing, is $287.99, billed yearly.

However, there are additional costs for each lead a contractor gets and there are different types of leads such as Exact Match which, they say, “promotes pros online where homeowners search most” and Market Match which is described as a lead service that “connects you with consumers looking for the best local business.”

HomeAdvisor pros can set a “spend target.” It is not a budget, per se, but rather, as HomeAdvisor puts it, it’s an “estimated monthly amount that you would like HomeAdvisor to try to meet when sending you leads. The spend target is not a cap, but rather an estimated goal of monthly lead spend, and will be split between Exact Match Leads and Market Match (ProFinder) leads.”

They also caution in their FAQ that they “also may allow you to exceed your Exact Match spend target by 3x, because customers are calling specifically for you and we do not want to turn them away, or for you to lose these highly targeted leads.”

According to our conversation with the service, factors that influence the cost of leads include: “area matched, job type, and additional pros matched.” HomeAdvisor claims they send leads to no more than three additional service professionals, with four being their reported max.

However, a class-action lawsuit filed by hundreds of contractors alleges that many of the leads sent to them were fake, with some of the leads claiming they had never even heard of HomeAdvisor and some being disconnected phone numbers, among other issues. 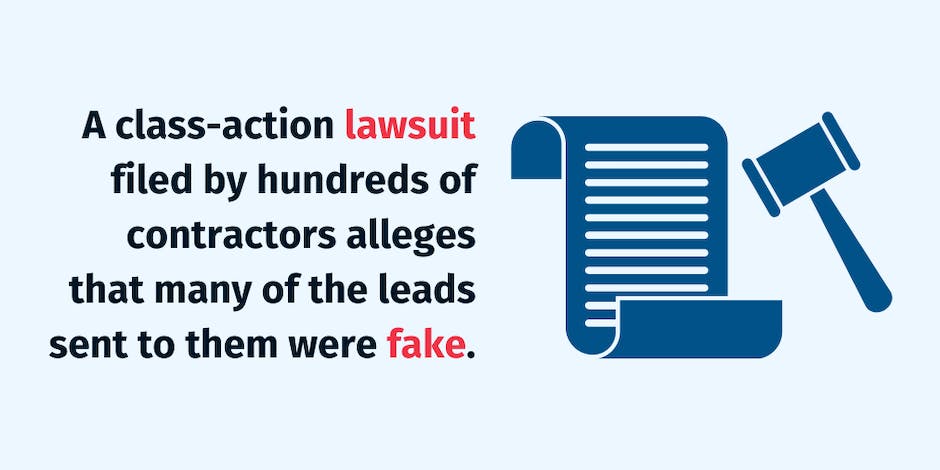 Another lawsuit was filed in California alleging that the service falsely advertised their background check requirements of service professionals and among more than 2,300 reviews of the service through the Better Business Bureau, their average star rating is 2.1, although their BBB rating is A.

Is HomeAdvisor Worth It?

Depends on who you ask. We spoke with Rich Spoto, owner of Woodchips Construction, Inc. - a residential and commercial building contractor - who says he’s a founding member of HomeAdvisor and has done well with the service since 2002, when it was called Service Magic.

He says he was excited about the service because, at the time, his company was having difficulty landing new leads.

Spoto says the first full year of using the service, he did almost $900,000 in work which, during that time, was “unheard of.”

Spoto admits he had an advantage that many contractors - both then and now - do not have: an internet presence.

“At the time I felt like a genius because there was nothing like it and I was relatively able to operate with very few competitors as I was one of the first to really adopt internet marketing.”

To date, Spoto says he’s spent approximately $20,000 a year with HomeAdvisor and has done probably $15M in work over the last 19 years. He suggests contractors who are successful with HomeAdvisor are those who respond instantly and in multiple forms: emails, texts, and phone calls.

“When people are focused on buying something, you respond immediately.”

“In order for a business to be successful with a company like HomeAdvisor, you have to be the first person to respond or engage with the lead. You’re going to get lost with all the other responses they’re going to get.”

Wilson’s company specializes in helping contractors market themselves and get more leads.

It’s Not For Everyone

Wilson believes that the best way for contractors to get their own leads is to come up with a system they own themselves, rather than relying on lead generating services.

“We suggest creating a lead generation system that the contractor owns. Get your own leads so they’re coming directly to your own business,” she says. “If you have your own lead generating system, you can bring in the right kind of client and build that trust so when they come to make a decision there’s a no-brainer: They’re going to come to you.”

Alternatives for Getting New Construction Leads

Wilson advises construction companies to invest in their marketing and advertising so their backlog doesn’t dry up. One common mistake she sees is contractors reacting to a slow-down in their work. This, she says, rarely works.

Instead, put time, effort, and money into ensuring your pipeline stays full.

“[Contractors] react. The ones that really get ahead are the ones thinking long term. They might be busy right now, but they’re not afraid to continue their marketing. When things slow down for them they have steady work lined up.”

This, she says, is the biggest mistake she sees contractors make: They wait until the last minute.

“Put in the work, even though you don’t need it in the moment.”

Thumbtack is another popular and similar service that Wilson says she has seen a little bit of success from. One of her clients - a remodeler focused on tiling - has received a few clients through Thumbtack but, she says, “they tend to be lower quality clients.”

Generating leads starts with planning. In fact, Wilson says this is an essential part of being successful when marketing your construction company. Understand your goals and budget. What are you trying to accomplish? How will you measure your success? What is your budget?

Social Media is a goldmine for contractors seeking to build their reputation and their brand. Even better, they’re ideal channels to showcase your work which, in the construction industry, is incredibly helpful.

“We like to stress that social media is a long-term game. You’re building trust, targeting people. It’s a good long-term strategy to build that trust with,” Wilson says.

“We see very good results with before and after photos if you have a visual product/service.”

Among the many ways Wilson’s team helps contractors get more leads, she praises Google Ads most.

Google Ads is a simple and affordable way to get your company’s name and brand in front of the right people. You can set a budget so you never pay more than your monthly cap.

“We’re tracking leads and getting results,” Wilson says. “That’s where our clients are getting the best return on their investment.”

Another great way to get more leads is to set up your company with a free Google My Business (GMB) account.

The service allows you to create an online business profile and listing that makes it easier to connect with potential new clients. You can give potential customers different means to contact you and view important metrics that help you see how your business is doing with customers and how they are interacting with you online. Wilson says it’s a great option for contractors. In fact, they help contractors set up GMB frequently.

“GMB is incredibly powerful and is part of local [Search Engine Optimization] (SEO). It’s free to set up, but it’s best to work with an expert to get the most out of the opportunity,” she advises.

It’s important to build trust with people. And to build trust, you need consistency. It’s about more than just having a Facebook business page; You have to update it regularly, as well as your webpage and any other online presence you have.

Your messages should be consistent, as well as your brand. This will help further establish trust among those who are looking at your services.

HomeAdvisor can be a useful tool for contractors to use if they have the time and commitment to dedicate to following up on leads and staying on top of their spend target to ensure they don’t go over their budget. However, it’s not the best option for everyone. Spend some time getting to know more about marketing and advertising so you can invest more into your company to get the leads you want.