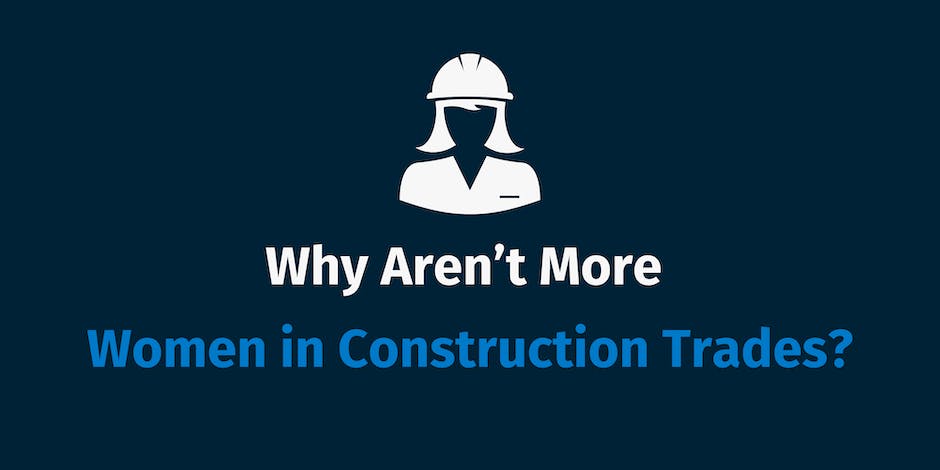 Women make up nearly half of today's total workforce but only about 10% of the construction labor force. And most of that number work in administrative and office positions. Only a handful actually work in the field as tradeswomen—2.5% to be exact.

So Why Aren’t More Women Working in Construction?

“Women can do anything that men can do, but it’s not what they’re accustomed to,” says Casey Brouse, a woman welder who’s put on a face shield and proudly melded metal for 20 years.

“[Women] don’t realize that the option is there,” says Brouse.

If you walk through a girls’ toy aisle, it’s unlikely you’ll see a plastic tool box there. Not many parents are introducing the love of building to their young daughters.

And, until recently, if you saw a picture of a person in a hard hat, that person was a man. Even now, if you do an image search for “construction worker,” very few photos of female construction workers will pop up.

Girls aren’t being introduced to construction when they’re young. And as they grow into young women, they aren’t seeing themselves represented in construction roles. So it makes sense that they aren’t going to be drawn to the trades—the trades aren’t even on their radar.

But things are changing.

In 2015, Dr. Mittie Cannon formed Power Up, an organization that introduces young girls and their mothers to the construction trades.

"I wanted to let other women know that there's this opportunity out there where you can make high wages, meet other people, do interesting work, and travel," Cannon says in an interview with Construction Dive.

So far, over 1,000 girls in preschool through 12th grade have been introduced to construction through Power Up’s programs. The organization now spans five states and Guam.

Tradeswomen, Inc. is another organization whose goal is to “recruit more women into construction and related trades.”

This California-based organization hosts career fairs that introduce girls to the construction trades in their junior and senior years of high school. They also partner with construction businesses to provide trade apprenticeships for women.

In Biloxi, Mississippi, The Moore Community House encourages women to enter the trades by offering a Women in Construction program.

The program provides an avenue for women, especially single mothers, to learn high-earning trade skills. In offering this program, the mission helps meet the industry demand for skilled workers while empowering single mothers to support their families.

Since 2008 they’ve helped over 700 women find employment in the trades.

As construction business owners continue to partner with organizations like these, more women will realize they can find a place in non-traditional industry roles. And as a result, more women will be attracted to skilled trades jobs.

But just because more women will be attracted to non-traditional employment doesn’t mean they’ll want to leave other industries behind.

3. Women Want Children and a Career

It doesn’t matter how many trades workshops young girls go to or how many apprenticeships they finish. Most won’t stick with a career in the trades unless the trades support them through pregnancy and motherhood.

Women don’t want to choose between having children or having a career. They want both. Other industries have recognized that and made significant efforts to support them. Construction companies who want to hire women to help beat the labor shortage should take steps to support them as well.

When they do, they won’t just solve the problem of finding skilled workers. They’ll also get to keep those workers longer.

On average, women stay with companies who support them through their pregnancies for six years per child. And considering that most workers only stick around for two years, that’s a big deal.

It’s no secret that women who work in male dominated industries often face discrimination and harrassment, and the construction trades are no different.

In fact, 88% of female construction workers report having been harassed on the job. The harassment women experience on construction sites can range from mild insults to full-on sexual assault.

Luckily, sexual harassment prevention training is on the rise. New anti-harassment legislation is being put in place. And, though there’s still plenty of room for improvement, sexist attitudes are slowly starting to fade.

Brouse says she’s seen a positive change within the past several years of her career.

“It was a lot different 10 years ago than it is now,” says Brouse. “People in general have changed with all this bullying and harassment. There are programs in place. It’s changed a lot for the better.”

And as attitudes toward women in construction keep improving, more women can confidently enter the trades.

Why It’s Important to Recruit More Women in Construction

The labor shortage is worsening, and drawing more women into the industry is a great way to add to the talent pool.

But that’s not the only reason to recruit more women into the construction trades.

Men and women think differently. Jokes are made about it every day. But it’s also a scientific fact that men and women’s brains work differently. And each has ways of thinking that bring strengths with it.

But since there are so few women in the trades, the construction industry is missing out on the cognitive strengths that women bring to the table.

Although there are plenty of men who are good team players, one study by Caliper shows that women have better team-building skills than men.

Women, on the whole, are more inclusive. They think about others around them. And, because they’re naturally empathetic, emotionally intuitive, and compassionate, they build stronger relationships.

The construction trades aren’t known for their ability to adapt to new ideas quickly. And the construction world has been a “man’s land” for a long time now.

But old ways are slowly changing. And more people in the industry are starting to see that women are perfectly capable of performing the same skills as men.

As more industry leaders awaken to this fact, they can start to tackle some of the longstanding issues that deter women from wanting to enter the trades. And hopefully soon we can see an influx of women entering the construction trades.